Let’s Start a Men’s Movement! Mandatory Vasectomies for All!

Let’s hear it for Chaz Stevens.

Never heard of him? I haven’t either, until today when a colleague told me of his story. Chaz, it seems, wants to ban the Bible in Florida public schools.

I’m not against the Bible at all. But I am for the establishment clause of the First Amendment in our Bill of Rights (“Congress shall make no law respecting an establishment of religion”) and I am most definitely for Mr. Stevens who—no joke—- petitioned 63 Florida school districts to ban the Bible.

What’s more, in Broward County, he also petitioned to ban the Oxford Dictionary, calling it “a weighty tome over 1,000 years old, containing more than 600,000 words; all very troubling if we’re trying to keep our youth from learning about race, gender, sex, and such.”

I am finally seeing a white man who isn’t a movie star or politician (though he is a self-described satirist and “stunt activist”) express his outrage at policies like the Florida state law that makes it easier for parents and county residents to challenge books in schools and having his views make the news. He didn’t just get on the news; he used his time, energy, and resources to put his idea into action.

In light of my continued frustration at men’s complacency over the Dobbs vs. Jackson Health decision that overturned Roe v Wade, I was inspired by Chaz Stevens’ courage and creativity. What keeps the rest of us from taking a Chaz Stevens kind of step, including me? 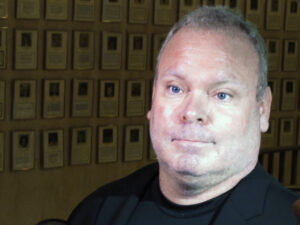 Chaz Stevens at the Florida Capitol building in Tallahassee, Fla., in 2013. Brendan Farrington/AP

I have an idea, finally: Men, let’s get organized and suggest to our state representatives that we introduce a bill that requires all men to get a vasectomy or use a male version of the birth control pill until they want to have a child when then they can apply somehow for permission. Of course, this will be almost impossible to enforce, so we’ll have to require all pregnant women to register pregnancies and claim who the father is—then the government can prosecute him/them. And for convicted rapists or deadbeat dads who don’t pay child support, let’s give them vasectomies as well. It’ll be an elegant solution for overpopulation and a strong deterrent for those who have perpetrated violence on women. Maybe the new law will soften the blow for the majority of women in the US who are outraged that their government is telling them they cannot have sovereignty over their own bodies. It’ll be a quid pro quo of sorts.

In the name of equity, one could argue that women should also have to go on birth control and face sterilization for rape, but of course, that isn’t really necessary. Men rape women in our society, rarely is it the other way around. Yet women are the group who get penalized for being the parent nature assigned to carry a child.

If you are a man, and you read the preceding paragraphs thinking, “wow, dictating who gets sterilized and making men use birth control feels like overreach for a country like the U.S.”,  the truth is, it’s not overreaching since we overturned Roe. We now have a precedent for how far into our lives the government can exert its influence, thanks to Dobbs vs. Jackson Women’s Health.

MEN, if we don’t fight for women’s reproductive rights, we’d better be ready to deal with the consequences when the tables are turned on us.

But I know you don’t really believe the tables could be turned, do you, men? Yeah, neither do I.

A lot of other mindsets and cultural beliefs—some of which are 500 years old—would have to be turned upside down before we need to be worried about government-mandated vasectomies or birth control for men.

But reproductive rights are just the tip of the iceberg.

What about the default view that in our society, women raise children regardless of if they are employed?  In our society, women are expected to have TWO jobs—one that takes care of domestic issues and child-rearing, and frequently, another income-earning job as well. Yes, that’s shifting some; thank God for millennials and Gen Zers—but we have a long way to go.

What about pay equity for women at work?  Oh, that’s OK, we don’t have to pay women as much because they can’t work the same long hours as many men since women shoulder more of the domestic obligation, even if they don’t want to. This “motherhood penalty” is why mothers make 70 cents for every dollar paid to fathers. It’s clear that employees need to update their policies to reflect the reality of today’s working moms and dads.

What about single women who don’t have children? They aren’t impacted, are they? They will be now if they need an abortion and live in a state where they can go to jail for getting one.

No matter what the issue is, there are layers upon layers of embedded cultural habits and beliefs that help sustain the status quo, which in this and many cases in our society, benefit men and disadvantage women. And our U.S. Supreme Court just made a major contribution to ensuring women will be in this weakened position for at least another generation.

Fellas, we better start lobbying now, or we’ll be next.

On some basic level, I’m betting Chaz Stephens knows how systemic all of this is, hence his strategy: they want to ban reading books like “Gender Queer –  A Memoir” because if kids shouldn’t be exposed to LGBTQ+ issues at school (even if they are queer or gender-fluid) then we better ban the book where all of these elements are first described.

Thank you Chaz for your courage. I’ve been stuck and struggling with where to begin. With all the social media and news I consume, yours was the first white male voice I have heard that really speaks to these issues.

Maybe we’ll call it “The Chaz Act” when we legalize mandatory vasectomies. Won’t that be an honor for Chaz? Hmmmm.

Never mind, I’m off to write to my representative…

**Special thanks to Peggy Nagae from The Diversity Collaborative for her ideas and positive provocation and conceptualization in the creation of this piece.