If you are dissatisfied with the state of things, here’s a suggestion: vote. Alternatively, if you feel pretty good about our general direction and recent progress and want to sustain it, vote. Whatever your stance is, voting is the constitutionally guaranteed right you possess to express and persuade the rest of us to consider your point of view. .

Our colleague, Rianna Moore, who was also a contributor to “Gaslights and Dog Whistles – Standing Up for Facts Over Fiction in a Fearful and Divided World” wrote, “Thinking critically (as in Critical Race Theory) is at the heart of democracy.” And no act more powerfully exercises our opinion in that democracy than voting.

Our democracy is based on the concept of “majority rules,” a principle that ensures decision-making power on any electable office or policy belongs to the group that has th

e most members. In theory, democracies ensure fairness by providing:

Our democracy and the constitutional rights guaranteed in it is predicated on the notion that the voice and vote of each citizen deserves to be counted. Assuming this happens, our US government is then guided and managed by elected representatives and public officials who understand what the people who elected them think and want, and they represent their interests as best as they can, even when those interests are conflictual and divided. 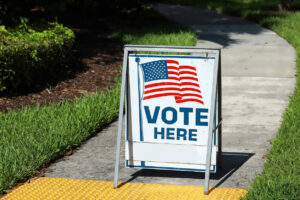 As the date of an election gets closer, politicians and issue advocates commonly commission polls to try to predict the outcome of an election. Polls assist them in understanding what issues are most important to people in various groups and geographies so they can try and shift the outcome of the election through improved or different messaging, emphasizing and de-emphasizing various campaign issues, or simply by providing more information on their stance and views.

Lately, election results have not been as reliably predicted by polls due to a number of factors, including:

Parties and candidates supporting progressive issues focus on increasing voter turnout, because polling data suggests that the more people who vote, the more likely progressive candidates are to win. As a counterpoint to the progressive strategy, those parties and candidates who generally identify as more conservative believe that voter accuracy and voter fraud are threats to fair elections and therefore work to ensure that only registered, legitimate voters are allowed to vote.

The issue of voting and what “suppresses” votes is more subtle.

In the early days of emancipation, carrying on into current times, intimidation tactics, physical violence, and threats of arrest, imprisonment, and even murder were and are used to suppress the votes of men and women of color and other minority or racialized groups. These tactics have an impact then and now.

In Florida last week, 20 people—some former felons, most of whom were black—were mistakenly arrested for illegal voting. The event made the national news and—given the historical context—raised concerns about the impact such events might have on African American voter turnout in Florida and elsewhere.

Research conducted by dozens of non- or bi-partisan studies and commissions suggest that US elections are among the most fraud-free elections in the world. A study by the Brennan Center for Justice found that voter fraud in U.S. elections runs between 0.0003 percent and 0.0025 percent. “Given this tiny incident rate for voter impersonation fraud, it is more likely, the report noted, that an American will be struck by lightning than that he will impersonate another voter at the polls.”

Your vote also matters in the 26+ states that now have book bans in place to restrict what can be and is taught in public schools. These bans are focused on historical and political texts that teach about the history of discrimination, enslavement, racism, and civil rights. For those of you who may feel untouched or unaffected by issues of race or ethnicity, these bans also include bans on books that address issues of gender and sexual identity and therefore impact women and non-binary people in your life as well.

In total, the number of books banned stands at 1,586. If you live in Texas, you are in the state with the most books banned, followed by Pennsylvania, Florida, Oklahoma, Kansas, and Tennessee. As a comparison, approximately 4,000 book titles were banned by Nazi Germany in the 12-year period beginning in 1933. I can’t wrap my head around what the implications are if the anti-CRT/women’s rights lobby gets enough air and votes to surpass that number.

Voting requires an “informed electorate.” Banning books is an assault on information, literacy, and the concept of free, public education. In the words of CRT co-author Kimberlé  Crenshaw, “When they make racism unnamable, they make racial justice unreachable, and then our multi-racial democracy is unattainable.”

About this assault on literacy and prohibitions on the rights of women, Professor Crenshaw also said:

“The tragedy is we have been here before, but the silver lining is we have examples of black resistance in America to draw from; an era where students, faith leaders, and activists took to the road to overturn the prohibitions of black travel and mobility to sustain segregation.’

Your vote matters and…

Is there anything you can do to make sure everyone’s vote is counted?